The Punjab Govt Imposed Ban on New Jobs has banned all new jobs except PPSC. According to recent reports, Chaudhry Pervaiz Elahi, the chief minister of Punjab, issued an order prohibiting new hiring and employment. However, only the Punjab Public Service Commission, or PPSC, will continue to conduct recruiting throughout the Province. Check out more information on Punjab’s ban on recruitment 2022.

Punjab Govt Imposed Ban on New Jobs Other than PPSC Latest Announcement Vacancies, A complete prohibition on all hiring has been put into place with immediate effect in the Punjabi government, according to a notice from the Chief Minister Secretariat. The Punjab Public Service Commission would still be used for recruitment, as usual. 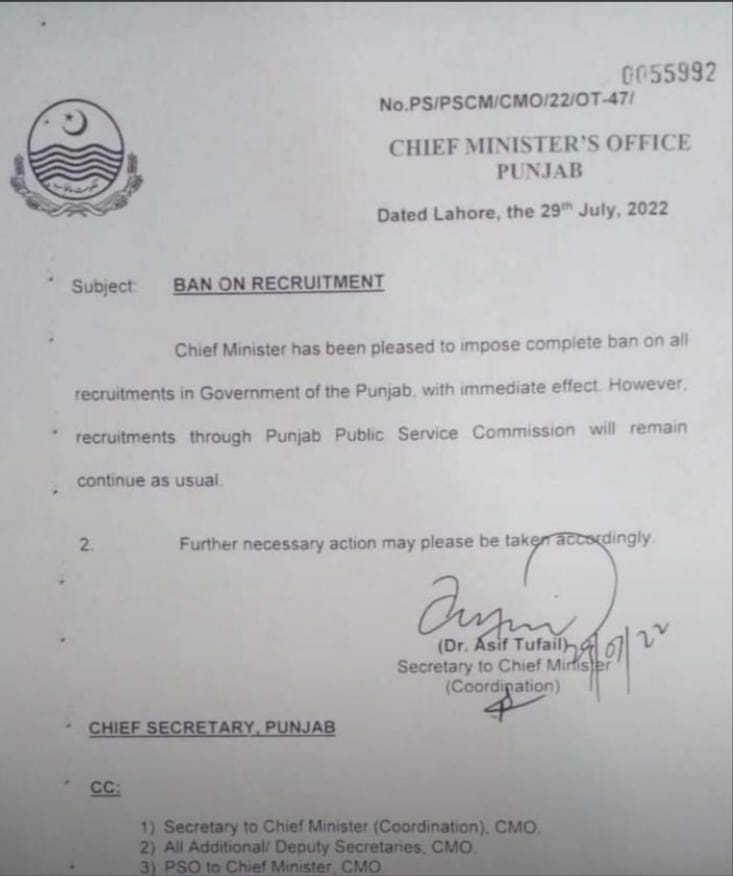 On July 25, 2022, Chaudary Pervaiz Elahi was chosen to serve as the Chief Minister of Punjab. He belonged to a political party and was an accomplished politician. From 2002 to 2008, he served as Punjab’s chief minister.

Only until the following Punjab Chief Minister’s decree is the PPSC permitted to run advertisements. All Punjabi government organisations are required to halt hiring till further notice.

However, this news shouldn’t deter candidates who are interested in Punjab Government Jobs 2022 because it is generally anticipated that the prohibition would be lifted sooner rather than later, increasing the likelihood that new positions will be filled throughout the Province.

Only those who have been short- listed will be communicated for an interview.

Operations entered after the deadline won’t be considered.

Disclaimer Before you apply for a job or give an advance to a suchlike officer, confirm everything. We aren’t liable for any damage or loss.