The Prison Department Rawalpindi announced on June 3, 2021, in Rawalpindi, the latest jobs in Dunya News. Eligible applicants invited applications. The eligibility conditions for applying for such employment must be satisfied by interested candidates. The description and eligibility criteria for Prison Department Rawalpindi are presented below. The deadline is June 21, 2021, for applying for this job. 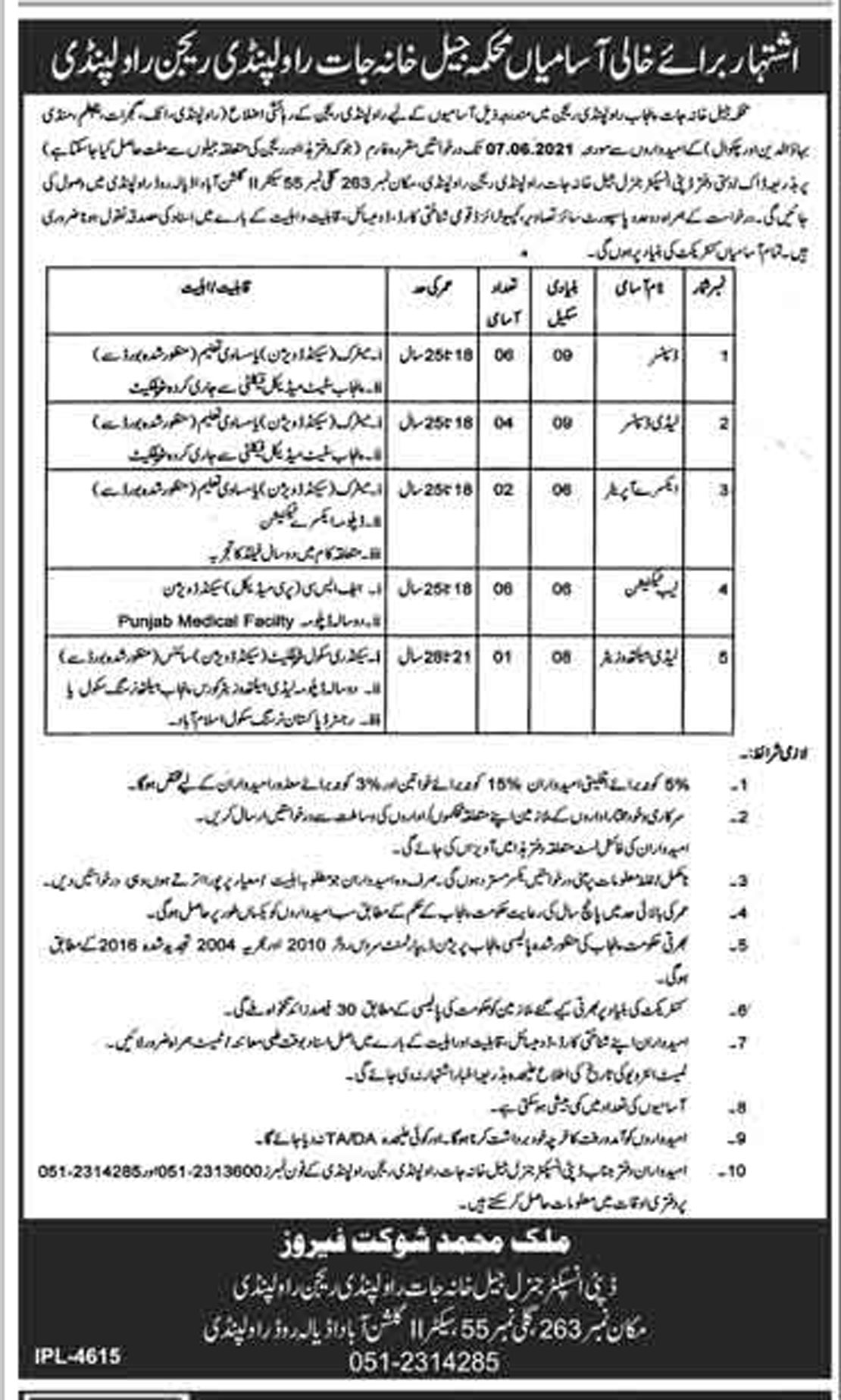 How to Apply Prison Department Rawalpindi?

Candidates interested may send their curriculum vitae together with the required papers to the mail address before the final date.
Educational document CNIC Domicile Certificate of 02x recent photographs of passport size

Interested candidates should submit their applications, along with all needed documentation, before the deadline.

Punjab Prisons is a progressive department that aims at ensuring the return of the offender to society as a useful citizen. The gradual transformation of Prisons’ administration, in line with the correctional philosophy and rehabilitative approach towards the jail inmates, has resulted in a wholesome and healthy environment in jails. Today, the Department not only lays a great emphasis on the moral education of the inmates but also carries a holistic approach with a view to facilitating the post-release reintegration of the prisoners with mainstream society.

This Department firmly believes in “hate for crime but not for criminal”. It also recognizes the fact that the notion of a safe society cannot be realized merely by detention unless the offender is corrected and reformed while being in prison. Towards this objective, the Department has undertaken a number of measures.

The Punjab Prison Department Rawalpindi was established in 1854 for Custody, Care, and Control of prisoners confined in the various central, district, and special jails in the province of Punjab. Dr. C. Hathaway was appointed as first Inspector General (IG) of Prisons. The Prisons Act of 1894 (Act No. IX of 1894) was passed by the Governor-General of India on March 22, 1894

Following jails were functional since the mentioned years, even before the Prisons Act of 1894:

At the time of independence, Punjab inherited nineteen(19) jails whereas Twenty (21) more jails have so far been commissioned in the province after independence. Presently there are Forty(40) Jails functional in the Province including One(1) High-Security Prison, Nine(9) Central Jails, Twenty Five(25) District Jails, Two(2) Borstal Institutions & Juvenile Jails, One(1) Women Jail and Two(2) Sub Jails. Three(3) new Jails are under construction at the moment.

Our vision, here in Prisons Department Punjab, is to create a conducive environment of reformation and welfare, with a special focus on Juvenile delinquents and women, so that every inmate leaves prison as a productive, applicative, and functional citizen of society. Upon instructions from Prime Minister Imran Khan and Chief Minister Punjab Sardar Usman Buzdar, we aim to bring civil society and social sector NGOs on board for a comprehensive prison reform agenda.

Categories Jobs in All Pakistan

Categories Jobs in All Pakistan